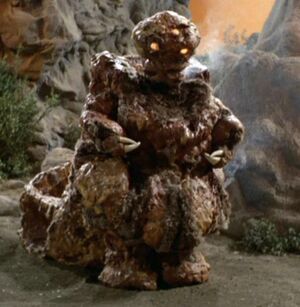 Star Trek
Excalbians are a species of sapient, mineral-based lifeforms native to the volcanic planet Excalbia, located in the Alpha Quadrant of the Milky Way Galaxy.

Described by Mr. Spock as being "like living rock with heavy fore-claws", Excalbians stand noticeably taller than the average Human. They have a slug-like body protected by seemingly tough brown skin with many bumps and rocky texture. Their upper body is fairly humanoid-like and possesses a pair of short, stubby arms ending in chelae-like claws. They appear to gesticulate a lot when speaking, possibly indicating that gestures play an important role in their native language.

A bulbous head is visible, supported by a short neck, and has no distinct features other than a number of round openings, asymmetrically arranged on the head, which glow yellow when the beings are talking. Their voice is high-pitched and robotic-like.

Excalbians seem capable of several surprising abilities, which appear to be natural to their race, although it is also conceivable that their "tricks" are performed thanks to hidden technological devices. Among these are the ability to change shape into a rock, glowing bright red during the transformation; telepathy (the ability to read minds of other beings); and most amazing of all: the ability to control matter and energy in order to create perfectly realistic, self-conscious figures, which Captain Kirk refers to as mere illusions, but which seem to behave as real entities, made out of ordinary matter. Excalbians are also able to survive in an Earth-like environment, which is surprising because the Excalbians' natural environment is much different from Earth, especially regarding atmosphere and temperature. In fact the planet Excalbia is deemed uninhabitable for Humans (and Vulcans), although a large portion of it was temporarily transformed into a habitable spot so that Kirk and Spock would be able to visit the planet.

Excalbians are also interesting in that they don't fully comprehend the Human concepts of "good" and "evil". In 2269, an Excalbian named Yarnek conducted an experiment to find out more about these notions. He created a self-conscious replica of ex-president Abraham Lincoln and sent him to the USS Enterprise in order to convince Captain Kirk and Mr. Spock to land on Excalbia, where they were joined by a replica of Surak, father of the modern Vulcan civilization. The Excalbian explained to them that they would participate in a battle of "good vs. evil", with Kirk, Spock, Lincoln and Surak representing the "good side". The "evil side" consisted of Genghis Khan, a Mongolian emperor from Earth's 13th century; Colonel Green, a genocidal military leader from Earth's 21th century; Kahless the Unforgettable, a legendary Klingon warrior and founder of the Klingon Empire; and Dr. Zora, an alien mad scientist from planet Tiburon.

At first, Kirk refused to take part in such a game, but the Excalbian threatened to destroy the Enterprise and her crew if he didn't. At the end, the "good side" emerged victorious, although the replicas of Lincoln and Surak had been killed in the battle. Yarnek still has difficulty in grasping the concepts of good and evil, since they both appear to employ similar strategies, but is convinced of the results (he notices that evil seems to retreat when confronted) and allows the Enterprise to leave unharmed.

Retrieved from "https://aliens.fandom.com/wiki/Excalbian?oldid=163722"
Community content is available under CC-BY-SA unless otherwise noted.