Evolved Vaxasaurians are an extraterrestrial species of saurians from the planet Terradino and the evolved form of Vaxasaurians.

An evolved Vaxasaurian somewhat resembles their precursor but with green skin, grey horns on their head, arms, chest, and back, an armored shell on their back, a helmet-like extension on their skulls, sharper claws, dark blue chest plates, and a mace-like structure at the ends of their tails.

Generally, evolved Vaxasaurians become bigger, bulkier, heavier and stronger, being able to take on an army of regular Vaxasaurians. They stand 20 feet tall and can grow up to 120 feet tall using their size-changing abilities.

They additionally gain the ability to change their hands into a missile launcher/barrel cannon-like weapon that fires bone fragments in the shape of bullets. 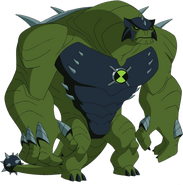 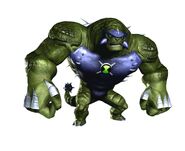 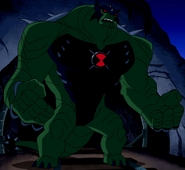 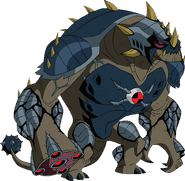 Ben 10,000 as Ultimate Humungousaur
Add a photo to this gallery
Retrieved from "https://aliens.fandom.com/wiki/Evolved_Vaxasaurian?oldid=157596"
Community content is available under CC-BY-SA unless otherwise noted.