Evolved Nanochips (alternatively known as Nanomites[1]) are a race of sapient biomechanical aliens and the evolved form of Nanochips.

Unlike ordinary Nanochips, Nanomites are grey metal humanoid insect-like aliens with a pair of wings and green circuitry-like patterns decorating their bodies.

Nanomites are capable of flight and are very agile while doing so. Their wings can glow whenever they are airborne.

Nanomites can reduce their size to microscopic scales at will.

Nanomites are highly adaptable, being able to understand the functions of machinery and other technology. They then use that information to make machines malfunction and break down in a matter of seconds.

Nanomites can generate bioelectricity from their hands and eyes that is powerful enough to incapacitate a To'kustar.

Similar to Galvans, an Nanomite's minuscule size can be a problem if fighting larger opponents.

Because they are extremely light, Nanomites can easily be blown back and immobilized by strong winds.

Nanomites can be affected by magic, as there is a spell that can crush them in a book.

As they evolve into a full alien race, Nanomites are able to establish their own civilizations.[1] 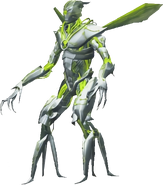 Nanomech (Omniverse)
Add a photo to this gallery

Retrieved from "https://aliens.fandom.com/wiki/Evolved_Nanochip?oldid=188439"
Community content is available under CC-BY-SA unless otherwise noted.