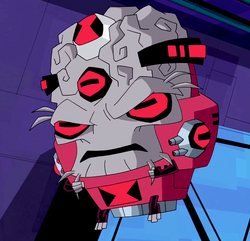 Ben 10
Evolved Galvans are cybernetically enhanced frog-like aliens from the planet Galvan Prime and the evolved form of Galvans.

Evolved Galvans have huge heads, with their brains pushing outwards, and noticeably small limbs. They require hovercrafts to move around, but mainly to support their heads. They also sport a third eye in the middle of their heads.

Evolved Galvans can fire a powerful energy beam from their third eye that can make a Gourmand inflate into a ball.

An evolved Galvan's natural intelligence is enhanced even further, enabling them to predict multiple scenarios and plan for each one.

Due to the size of their head, evolved Galvans are completely dependent on their hovercraft for supporting themselves.

Evolved Galvans are vulnerable to gravity-based attacks from a Galilean.

Ultimate Albedo
Add a photo to this gallery
Retrieved from "https://aliens.fandom.com/wiki/Evolved_Galvan?oldid=181653"
Community content is available under CC-BY-SA unless otherwise noted.