Evolved Arachnichimps have gorilla-like bodies with black fur and purple skin. The extra pair of arms that a normal Arachnichimp would have are replaced by two pairs of purple spider legs. They also have an extra pair of eyes, making it a total of six eyes rather than four. 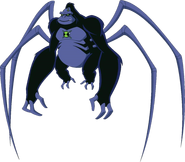 Albedo as Ultimate Spidermonkey
Add a photo to this gallery
Retrieved from "https://aliens.fandom.com/wiki/Evolved_Arachnichimp?oldid=160357"
Community content is available under CC-BY-SA unless otherwise noted.