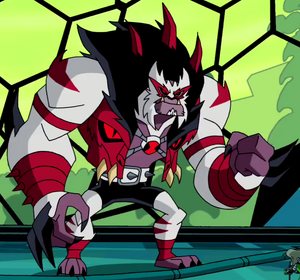 Evolved Appoplexians are basically bulkier versions of their regular counterparts. They have white skin and orange fur with black stripes everywhere except their feet, hands, chest, neck, and lower jaw. They have small claws on their fingers and toes, giant claws coming out from the elbows, three giant green spikes and a long thick black mane on their backs, orange faces with flipped up hair and sideburns, and black sharp eyebrows.

Some evolved Appoplexians can instead have dark pink skin, white fur with red stripes, three red spikes on their backs, white faces, and red eyebrows.

For the most part, evolved Appoplexians retain their normal counterpart's abilities, such as enhanced strength and durability. They also have two giant claws on their hands rather than just one. 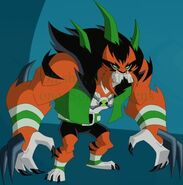 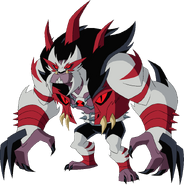 Albedo as Ultimate Rath
Add a photo to this gallery
Retrieved from "https://aliens.fandom.com/wiki/Evolved_Appoplexian?oldid=169814"
Community content is available under CC-BY-SA unless otherwise noted.