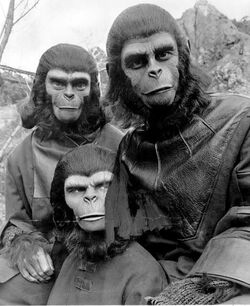 Varies from species to species

Planet of the Apes

Evolved Apes, is the term used to refer to great apes whose intelligence has been increased from the Simian Flu, a virus that changes the intelligence and vocal anatomy of great apes.

The Evolved Apes are not a single species but have different "ethnic groups" which include; chimpanzees, gorillas and orangutans. Each subcategory has different physical characteristics and abilities, however, most of the Apes are agile, strong and possesses the innate ability to climb.

The intelligent Earth apes evolved at some point between the year 2500 (when the Antelle expedition left Earth for Soror) and the 33rd century. They seem to utilize French, at least as a written language.

Gorillas are the largest ethnic group of evolved apes. They are general employed for manual jobs and sometimes as soldiers. They posses a heavy build and large noses, they can range form being black to dark grey in skin of hair color.

Orangutans are the second to largest ethnic group of evolved apes. They are notably different form the other apes, as they have reddish-brown hair and skin flaps. Unlike the orangutans of the present, they have longer legs and varying skin flaps, ranging from very prominent to non-existent.

Evolved apes are grouped in castes from species to species, as a general rule, gorillas play an important role in manual labor. Chimpanzees are most often scientist, but can also be soldiers and might have a little more veto power in society then gorillas. Orangutans are the highest caste, they are generally politicians, but some can be scientist and possibly soldiers.

Retrieved from "https://aliens.fandom.com/wiki/Evolved_Ape?oldid=184860"
Community content is available under CC-BY-SA unless otherwise noted.