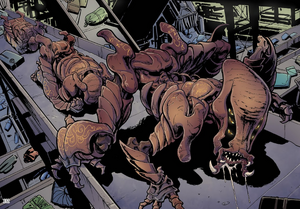 Grey Area Universe
The Ethreth Twan are an alien species that appear in Grey Area: This Island Earth.

The Ethreth Twan possess red carapace. They possess six eyes and mandibles, almost like insects. Ethreth Twan are registered as inorganics according to scans. They are capable of folding themselevs into vessels that resemble trunks, which are often mistaken as luggage.

Ethreth Twan means: "Silent Killers Who Move With Grace And Slay The Deserving", suggesting they are a race of assassins.

Retrieved from "https://aliens.fandom.com/wiki/Ethreth_Twan?oldid=156453"
Community content is available under CC-BY-SA unless otherwise noted.