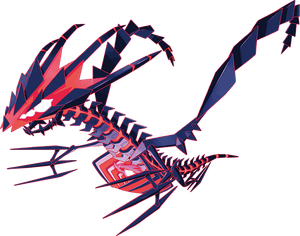 Junichi Masuda
Eternatus is a Legendary Pokémon found with the Galar Region. It is the largest known Pokémon to ever exist, no other Pokémon on Earth even coming close. Eternatus arrived to Earth in a meteor approximately 20,000 years ago. It is responsible for "The Darkest Day" that occurred in Galar, and its body became split apart in numerous wishing chips, pieces, and stars after it was defeated by Zacian and Zamazenta.

In its original form, it vaguely resembles a skeletal dragon. Its torso is exposed, releasing its energy core encased in what appears to be a ribcage, and the rest of its body resembled a spinal cord. Its dark scales are held in placed by red-colored energy.

In its ultimate form known as "Eternamax Eternatus", it forms into a hand-like shape attached to a cyclone of Dynamax energy. Its energy core is located in the palm of this hand, which itself is made up of both Dynamax energy and dark scale armor.

Eternatus has the ability to collect and gather energy from the planet through its energy core, emitting its own form of energy known as "Dynamax". The effects of this energy causes Pokémon to grow immensely in size and become extremely hostile.

Retrieved from "https://aliens.fandom.com/wiki/Eternatus?oldid=196252"
Community content is available under CC-BY-SA unless otherwise noted.