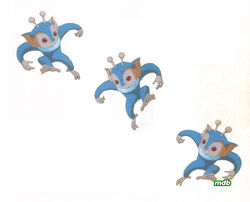 Metroid
Etecoons are sapient, bluish-green organisms that act in a similar manner to primates who were once found on the rogue planet Zebes, although it does not seem particularly likely that they were indigenous to the world, due to the dangerous inhabitants of the world and being an extreme contrast to nearly everything else. Their language consists of chirping sounds.

They are friendly and non-violent organisms, and when Samus Aran happened to encounter a trio of them when she accidentally fell into a hole, they playfully taught her how to continuously jump off of walls. During the destruction of the planet Zebes, she happened upon the trio as well as a Dachora (which carried its unhatched egg with it) trapped within the former lair of a Torizo, and she used her Hyper Beam to free them, and they subsequently escaped in a starship. Later she re-encountered the same group aboard the Biologic Space Laboratory Research Station, where they had been taken captive but had survived the infestation long enough for Samus to release the locks and allow them into her ship as mischievous stowaways. This time around, it was the Etecoons and Dachora which saved Samus' life from a destruction.