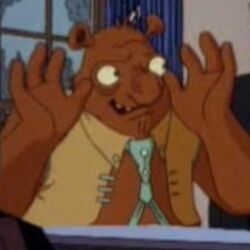 Men in Black
Etalffap is one of the several extraterrestrial actors living incognito on Earth and affiliated with the Hollywood branch of M.I.B., better known as "the Agency", which allows him to appear in films in his actual alien form, instead of wearing a disguise.

Etalffap is a brown mammalian biped with four-fingered hands, bulging eyes and a couple of short antennae.

He's the star of a highly lucrative comedy series in which he lives secretly in the White House with the United States president and makes pop culture jokes; including a joke about fellow alien actor Spacedemon.

Retrieved from "https://aliens.fandom.com/wiki/Etalffap?oldid=180393"
Community content is available under CC-BY-SA unless otherwise noted.