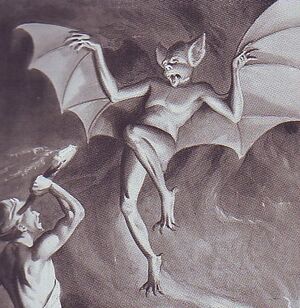 Gustave le Rouge
The Martian Erloors are humanoid bat-like creatures with membranous wings and glowing eyes. Despite being almost the size of a man, and having wings that have somewhat degenerated to allow the development of hands at the tip, the creatures are still capable of flight owning to the weaker gravitational attraction of Mars. In addition to their hands, their feet are also prehensile, allowing them to hang on tree branches with relative ease. They appear to be strictly nocturnal.

The Erloors are worshiped by the humans of Mars - a race of short, overweight people who practice agriculture and domesticate animals, but have no knowledge of fire. The human Martians periodically offer their best animals to be sacrificed as food for the Erloors. If they fail to do so properly, the humans themselves may become victims of their parasitic gods.

Retrieved from "https://aliens.fandom.com/wiki/Erloor?oldid=181758"
Community content is available under CC-BY-SA unless otherwise noted.