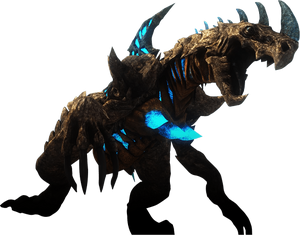 Erginus is a large reptilian kaiju that appeared on Earth in 2025 (2022 in the case of Earth Defense Force 5 continuity), as one of the threats alongside the Ravagers to invade and takeover the world. While considered a creature waking up from the ocean, most agree it's a mutant deployed by the Ravagers from a distant planet where it is the apex lifeform.

Erginus, much like Solas, holds a resemblance to that of Godzilla, but in a more vague sense in comparison. Standing at 72 meters tall, it is the largest of the kaiju, taller than Archelus, which it is sometimes deployed with. They are large reptilian-like creatures, with numerous areas of blue-glowing skin. Three blue spikes jut out of its chest, and it has a skeletal-like pattern along its back and sides. Numerous blue spikes grow off of its back down to its tail, and across its head.

Erginus's main methods of combat is pure force: tail swipes, slashes with its claws, and ramming with all its strength. It can also release a light blue fire beam at its targets.

Retrieved from "https://aliens.fandom.com/wiki/Erginus?oldid=152654"
Community content is available under CC-BY-SA unless otherwise noted.