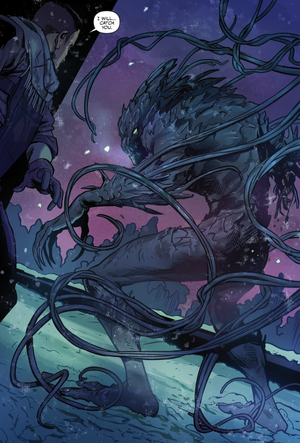 The Erebus are a sapient alien species from the planet Imera.

They are dark scaly creatures. They possess tendril capable of powerful blows or even piercing stone. They have bacterial colonies in their digestive tract to create biological weapons.

The Erebus are considered the most advanced species, however some sapient algae contend that statement.

The Erebus government formed a treaty with the United States Government to intern a terrorist named Nyx on Earth. One of the conditions was that the Humans were to keep him out of Lustrum.

Retrieved from "https://aliens.fandom.com/wiki/Erebus?oldid=159906"
Community content is available under CC-BY-SA unless otherwise noted.