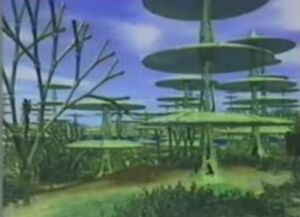 The Pagoda Trees are a common species of vegetable life forms from the planet Epona.

The Pagoda Trees are most easily recognizable by their circular leaves, which maximize the surface area for absorbing carbon dioxide, which isn't as common in their atmosphere as it is on Earth. They're also capable of some level of mobility, pulling their branches out of their way if a herbivore tries to graze on them.

Retrieved from "https://aliens.fandom.com/wiki/Epona_Pagoda_Tree?oldid=164942"
Community content is available under CC-BY-SA unless otherwise noted.