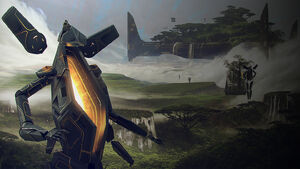 The Epistis are a minor race of machines in Endless Space.

The Epistis were created by an unknown race that died out several millennia ago. It is hypothesized that the Epistis were likely created as planetary guardians, charged with preserving their homeworld's fragile ecology through aggressive defence and recycling discard materials.

The Episitis are programmed ecologists with directives targetted in preserving their world's ecosytems with lethal force. Its unknown if these objectives became corrupted, leading the Epistis to turn on their creators is unknown, but they are a fanatical, dangerous civilization of recycled warmachines. Due to their obsession they have very little interest in learning about other races and worlds.

Retrieved from "https://aliens.fandom.com/wiki/Epistis?oldid=172635"
Community content is available under CC-BY-SA unless otherwise noted.