"Looming a full twenty meters in height, it was a veritable study in alienness. Its cuticle-covered body was an intricate collection of ridges, folds and curves, flanged and wrinkled so as to almost defy description. Here a pair of moisture-dampened openings quivered and flared, while behind float-bladders pulsed and expanded whith inrushing air. A web of glowing biolights surrounded a small pair of recessed infrared pits. Two swinging, orange sonarbooms stretched from beneath enormous, overhanging fins. Above them, a pair of gyrating balance organs oscillated in a blur of constant movement. Surmounting the forward, vertical portion of the organism's body was a great translucent bladder that seemed to be its principal organ of buoyancy. Running throughout this vast sagittal sac was a fine tracery of veins, delicately backlit by the glowing clouds behind. But most remarkable of all, two muscular arms, terminating in dextrous-looking hands, hung from the creature's sides; in disbelief I stared at the giant club that the creature carried. It was botanic in origin, and gave the appearance of having been gnawed into shape."
―Wayne Barlowe 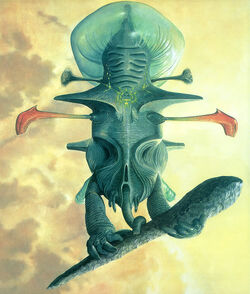 Wayne Barlowe
Eosapiens are the most advanced life form on Darwin IV with the intelligence of early Humans such as Homo habilis.

They float in mid-air by using two bags filled with methane gas. Eosapiens have fingers that they use to manipulate objects such as spears and create formations on the ground. They live in small tribes and hunt the other creatures on the planet.

They hunt, and are hunted by, Skewers.

In Expedition, Barlowe encounters a killing pen with an Arrowtongue head near the Flipsticks, then he sees them in the Amoebic Sea harvesting floating balls of gel during the storm where he encounters the Sea Striders. In the book, they hunt by dropping their huge flechettes from the sky to cage a prey item. Then they twist its limbs off and proceed to devour it. In the documentary, they kill their prey with spears.

A group of Eosapiens begin to spy on probes Leo and Ike from the very moment their shuttles land on Darwin IV. They follow both probes while at the same time hiding from them whenever they turn their backs.

Along the way, the various fauna of Darwin IV encountered by the probes are spooked by the hiding Eosapiens. The Unths and Bladderhorns Leo observes flee in terror when the Eosapien's call is heard, and even the Emperor Sea Striders turn, stop, and look around before moving away. They kill a Skewer who is mid-hunt and that tries to attack Ike later, before dragging the carcass over the hill and out of sight. The Eosapiens destroyed Leo when he launched a camera disk, which they considered a threat. When he did this again to find his location, the Eosapiens shut him down completely. On Ike's mission to find Leo, the Eosapiens were watching him constantly too.

Their intelligence is quite simple, and they rely on crudely made weapons similar to ancient Humans. Though they speak with short gasps of air and clickings from the appendages on the sides of their heads. This is pretty advanced for such a species.

Possibly in the next 200,000 years they can form civilizations close to that of 21st century Humans. Curiously they lack any form of fire, probably because temperature is relatively constant on Darwin IV, eliminating the need for heat, most species on the planet use sound to perceive the world around them, eliminating the need for light, and finally the atmosphere is very dense with oxygen, thus making the possibility of fire on Darwin IV impossible anyway, and, should the oxygen not be the problem, the lack of resources would be. As Darwin IV contains pocket forests, which, not only are small and rare, but would be quite a distance from wherever a group of Eosapiens may be living at the time.

Retrieved from "https://aliens.fandom.com/wiki/Eosapien?oldid=181649"
Community content is available under CC-BY-SA unless otherwise noted.