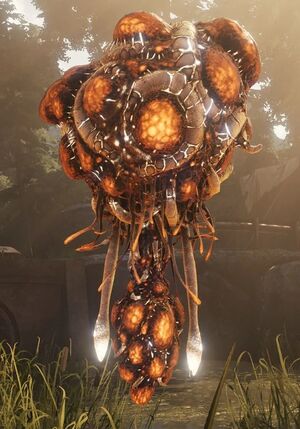 The Enrager is one of the alien lifeforms appearing on Earth since the Meteor Strike in 2031 in the Earthfall Universe.

Compared to the other Aliens of the horde, the Enrager is perhaps the least threatening. It appears as a form of fleshy, floating mass, two tendrils with glowing tips dangling underneath it, and numerous orange eyes all over its body.

The Enrager, ironically, is the most passive alien of the horde, and it doesn't go out of its way to attack anyone directly. However, while it lacks any self-defense, it does create a frequency when spotting a foreign creature, which alerts other members of the horde and makes them more bloodthirsty. It is presumed this is its form of defense.

Retrieved from "https://aliens.fandom.com/wiki/Enrager?oldid=181648"
Community content is available under CC-BY-SA unless otherwise noted.