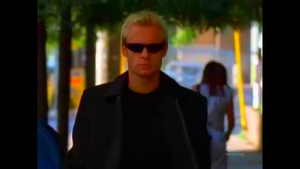 An Enixian in Human Form.

Enixians are a species of extraterrestrial organisms with heightened sensitivity to some senses.

Enixians have preternaturally heightened senses of smell, hearing, and taste. This ability can be seen as a double-edged sword, serving as both a blessing and a curse on planets such as Earth, which has odors, sounds, and flavors that these ultra-sensory organisms are not familiar with "back home". An example is when an Enixian tried to kidnap Jess and Mel, only for Mel to use her personal alarm. Due to his heightened sense of hearing, the high-pitched sound proved excruciatingly painful for the Enixian - allowing Jess and Mel to escape. Another is the fact that all Enixians wear sunglasses, even at night, due to their ultra-sensitive and alien-looking eyes.

Enixians are also known for making a drug known as Feckmon, which begins as powder that is later made into a green liquid. The drug's effect on Enixians and other species in the Migar system is a calming effect, while the drug itself is administered in the user's eye to make it work faster. Due to its effect, the drug is used in the SAR TOP Prison as a way of keeping the prisoners calm.

According to Cole, half of the Enixian's homeworld - Enix - is covered with snow.

When over 200 prisoners escaped to Earth thanks to the Vardian known as Zin, several Enixians began to make Feckmon on Earth to serve to other alien prisoners as well as Humans initially - being dispensed in pens that have been adapted to act like droppers. However, Feckmon has a different effect when used by Humans, due to Human blood being different. The drug itself provides the user with a 'high', such as when Jess' friend Mandy used it - to which she described it as 'the best high on the market'. However, when used a few times by Humans, Feckmon blocks up the person's heart - meaning the person will suffer a heart attack. This is what happened to Mandy after she took Feckmon several times, resulting in her having to be rushed to hospital and for Zin to order the Enixians making the drug to stop serving it to Humans. With help from Mel, Cole was able to stop the Feckmon trade altogether.

Retrieved from "https://aliens.fandom.com/wiki/Enixian?oldid=164865"
Community content is available under CC-BY-SA unless otherwise noted.