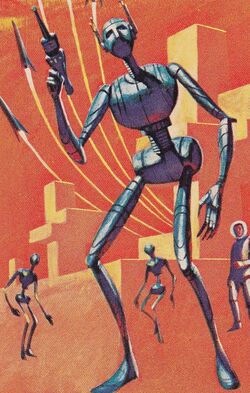 Clifford D. Simak
The Engineers are an ancient, humanoid robotic race which have colonized galaxies at the very edge of the universe. Created by an ancient race which originated on Pluto, they were sent to the stars to find new worlds for their masters, but to no avail.

Engineers communicate by telepathy, but are unable to properly exchange ideas with most alien races due to the extreme differences in their ways of thinking, although humanity is a notable exception. Being an ancient and benevolent race, they came to regard themselves as guardians of the universe and have directed a lot effort to fight against the brutally expansionist Hellhounds, who seek to conquer all creation.

Due to their mechanical nature, the minds of the Engineers lack creativity. They're very good at applying ideas, but not good at coming up with new ones. The concept of art was unknown to them before coming in contact with Humans.

Retrieved from "https://aliens.fandom.com/wiki/Engineer_(Cosmic_Engineers)?oldid=196947"
Community content is available under CC-BY-SA unless otherwise noted.