Alien Species
Register
Don't have an account?
Sign In
Advertisement
in: Actual Universe, Creatures of Unknown Sapience, Wildlife,
and 3 more 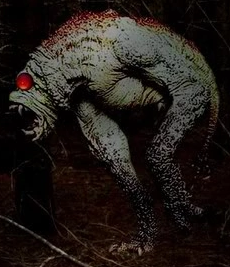 Real
The Enfield Monster; a.k.a. Enfield Horror; is a mysterious three-legged cryptid originally reported on April 25th, 1973, in the city of Enfield, Illinois, by a man named Henry McDaniel.

McDaniel described this creature as grey in coloration, standing about 4.5 feet tall (~ 1.37 meters) on three legs. Its body is short, and it also has a couple of small arms, and glowing pink eyes described as being as big as flashlights.

When McDaniel shot the beast, it produced a loud screech and jumped away into the night, covering distances of about five meters with each jump. Its six-toed footprints were later discovered by the police.

In spite of its bizarre appearance, McDaniel also claimed that there were human aspects to it as well, and expressed the opinion that the creature was extraterrestrial.

McDaniel's first encounter with this creature happened just outside his house at about 9:30 p.m. on April 25th. After firing four shots at it (one of which hit it), the creature leaped away, and he notified the police, who found only footprints, but no sign of the mysterious beast.

About two weeks later, McDaniel saw the creature again in the vicinity of a railroad, and a search party was formed to look for it. They located an "ape-like" animal standing in an abandoned building at the area, and managed to get a sound record of its vocalizations, but once again, attempts to fire at the beast resulted in it escaping into the night, not to be seen again afterwards.