An Energy Vampire is a very specific kind of Vampire known to feed on the lifeforce of Humans in order to remain alive. They were seen in the 1985 film Lifeforce, directed by Tobe Hooper. These creatures look human in appearance, however these beings are more than just human and are more powerful than any of the average weapons that the military has today.

Energy Vampires are in fact humanoid, however their natural form is that of a large, grotesque bat-like creature which possesses bio-mechanical features in nature. These features are similar to that seen on the Xenomorphs and Sil's Species. It possesses a large cranial cavity somewhat bigger than a Human's and dog-like ears with small red eyes. Their wings are similar to that used on a bat, which seem to be 4-6 feet in length.

With their powers however, these vampires can take the form of any species they come across, which also includes Human. When in Human form, the creatures usually walk about naked, which is most likely due to the fact that their natural forms cannot permit the use of clothing. This is obvious due to the fact that their wings would make it hard for them to put a shirt or a pair of pants on, so walking about in the nude seems more like a comfort or habit they practice when not in their natural form. Despite this, they can acquire clothing in ways similar to that of the Terminator, which is to kill their victims and take their clothing from them.

These beings are known to feed upon the life force of a human being and it usually will turn their victims into energy vampires as well. Usually electric blue beams of energy can be seen when they vampire feeds and as soon as they are finished, their powers and appearance will remain the same, leaving a mummy like corpse of their victims behind. Usually when a victim comes back, they have a certain amount of time to feed before exploding into dust and when they do feed, their skin will regenerate, however they must constantly feed for them to remain the way they were when they died.

Being bat-like creatures, it is hard to understand exactly how these creatures mate and reproduce. It is possible to assume that they can reproduce in the ways of other life they have come across, such as human.

The technology of the energy vampires is bio-engineering, like Species 8472 or the Breen. The Derelict vessel they use is built out of such technology, making the inside of the craft look like an oversized artery. They also have mastery in terms of forcefield technology, possibly either generated by them or the ship. 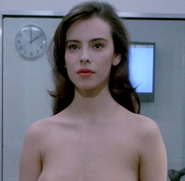 The Female Vampire appearing to regain energy given to Col. Tom Carlson

A transformed energy vampire feeding on another human

Part of the Vampire's vessel within Halley's Comet

The vampires in suspended animation

The Female Vampire dressed in a robe
Add a photo to this gallery
Retrieved from "https://aliens.fandom.com/wiki/Energy_Vampire?oldid=160125"
Community content is available under CC-BY-SA unless otherwise noted.