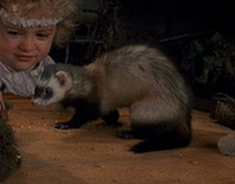 Star Wars
Endorian Ferrets are small, predatory creatures indigenous to the forest moon of Endor. While pink-skinned, they are covered in a layer of fur that can be brown or black, although an albino shade of white is not an uncommon sight. Their eye color is naturally brown, but the albinos have pink eyes. They have been apparently domesticated by the locals, instead of being used as a food source. While often considered both cute and cuddly, the ferrets could be very dangerous - particularly if a young Ewok were to get too playful with them. However, they more often than not just gave their Ewok masters a nip or claw to ensure that they would not be annoyed any longer.