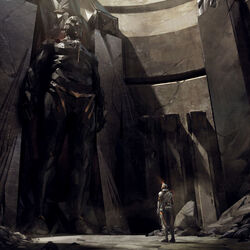 Endless Universe
The Endless were a race of immortals and the precursor civilization that gave rise to many races and civilizations in the Endless Galaxy.

The Endless civilization arose on the planet Tor, where three separate distinct races coexisted: the Tandu, the Haduns, and Eaür.

The Torians as these races were collectively called only left their world and mastered spaceflight after discovering evidence of extraterrestrial life, the Harmony. While they could not communicate with the Harmony, studies into their unique physiology gave the Torians a greater understanding of space-time. With it, the Torians were able to fully explore the universe at their leisure.

The full exodus of the homeworld was a tragedy that was a result of a mining accident conducted by the Eaür. The aquatic race accidentally drilled into the core of the planet resulting in the planet to become unstable and uninhabitable. The planet was evacuated in mass. The death of Tor had a severe effect on the minds of the Torians which eventually lead to them in pursuing sciences that would prolong life and defeat death.

Their answer to the solution of death was Dust, a miraculous substance of nano-computers that could enhance the Torians biology and longevity. In addition it could even upload them minds into computers gaining a virtual existence. Of three races that began from Tor, two new sub-races were created: the Concretes and the Virtuals.

With Dust the Endless as the Torians called themselves to reflect their immortal status, they could manipulate the environment around them. However while Dust evolved them physically, many societal gaps began to emerge between the Concretes and Virtuals. The Concretes were Endless that had chosen to enhance themselves physically using Dust, whereas the Virtuals chose to abandon the physical world for that of a computerized existence. The distrust between them caused a schism that erupted into full scale war, as each side view one another as abhorrents.

When the wars were over, the Endless civilization had collapsed, however many of their inventions, particularly Dust persisted to be used and discovered by the forerunner species.

Though thought to be extinct some Endless survived into the modern era, thanks to their immortality and scientific wonders. While few in number some have been active in the galaxy, content in staying behind the scenes. A few Endless such as Elohys attempted to cover the crimes of their ancestors, such as the horrific experiments on Auriga.

Isyander St Shaiad, the leader of the galaxy spanning order known as the Academy reveals that Dust originated from an ancient god-like race known as the Lost. Somehow the Endless, specifically the group that would become the Virtuals committed unspeakable acts of genocide upon the Lost in order to gain their power, which took the form of Dust. Isyander's life work was to write the wrongs of not only the Endless but his people who in turn worshiped the Virtuals by resetting Dust to restore the old gods.

Although their society is no more, a few of the Endless have survived their race's destruction.