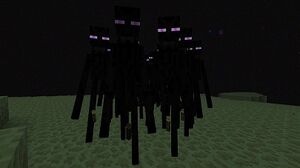 Any habitat in the End, the Overworld, or the Nether

Passive (but become aggressive when looked at)

Endermen are frightening monsters; while not from another planet they are from the End, another dimension adjacent to the Overworld. Though not directly hostile, they are apparently extremely territorial and will attack anything that looks them in the face or that attacks them first.

Endermen have purple eyes that glow. Though (likely) originating from the End, they can appear in the overworld and can function normally. They have the ability to teleport and have glow effects like a nether portal. They are hurt by water and can be damaged by simply stepping into it.

They fight skeletons if they are shot and are attacked by iron and snow golems. Upon death, Endermen will drop ender pearls that can be used to find the End portal (if crafted into an eye of the ender) or to teleport.

An Enderman
Add a photo to this gallery

Retrieved from "https://aliens.fandom.com/wiki/Enderman?oldid=187049"
Community content is available under CC-BY-SA unless otherwise noted.