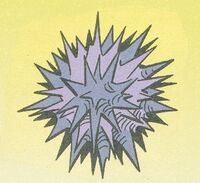 Encyopylas Transloci is a naturally occurring virus from the planet Argo. The virus was the most feared killer on Argo, periodically wiping out great sections of the population until a cure was discovered by Var-el of krypton. Every child on Argo was inoculated when he or she reached the age of 15.

Retrieved from "https://aliens.fandom.com/wiki/Encyopylas_Transloci?oldid=128551"
Community content is available under CC-BY-SA unless otherwise noted.