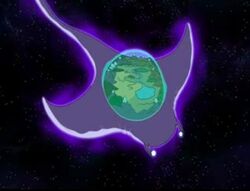 Futurama
The Encyclopods are a formerly-extinct species devoted to the preservation of the DNA of all endangered life forms and the recreation of species from its collection.

Their last egg, a Violet Dwarf Star, was almost destroyed by Leo Wong as part of his plan to build the universe's largest miniature golf course. Thanks to the interference of a group of eco-feminists led by Leela and Fry's sabotage, the Encyclopod was safely hatched, bringing back several long extinct species with it.

Over millions of years, an ancient race of either frogs or snakes evolved into a mighty species known as the Encyclopods. They resemble gigantic manta rays, with eggs that have the appearance of Violet Dwarf Stars. They apparently have the power to communicate with their minds as they can communicate with people through the vacuum of space. They harvest the Ch'i and DNA of every endangered species, including Humans. For years they have battled the Dark Ones, in the Arms Race of Evolution but finally won in 3009.