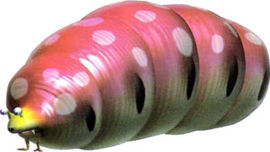 The Empress Bulblax, also known as the Queen Bulborb, is the largest known "species" of Grub-Dog ever discovered and studied on PNF-404. Most, if not all, of its studies are done by Captain Olimar, and is advised to not be studied under any circumstances due to the risks involved.

Despite the official name, the Empress Bulblax is actually the female version of the Bulborb, with their front head, eyes, and legs looking like any other Bulborb, yet with its backside extremely swollen with five segments to it. Empress Bulblax coloration vary on each Bulborb species, and reports even say male Bulborbs can change their sex into the Empress Bulblax in a complicated transformation, if the previous queen dies.

Empress Bulblax are vulnerable to the outside world, and are only found deep underground in chambers, unable to move on her legs anymore. male Bulborbs bring food to her, with the female's main purpose only to reproduce Bulborb larvae, which she can lay thousands at a time.

Retrieved from "https://aliens.fandom.com/wiki/Empress_Bulblax?oldid=152821"
Community content is available under CC-BY-SA unless otherwise noted.