Should not be confused with Zerg 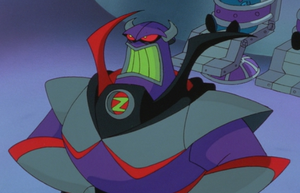 Evil Emperor Zurg is a prominent evil crime boss and the sworn enemy of the Galactic Alliance. He rules over the largely automated Planet Z, and has a minion of evil robots and at least two enslaved species (Grubs and Brain Pods) working for him. His main opponent is Buzz Lightyear, a space ranger of Star Command.

Although he is a powerful and utterly evil character, Zurg is also a comical, flamboyant figure who often breaks the seriousness of otherwise purely evil statements. He enjoys mocking his opponents by videotaping awkward moments of them.

It is still a mystery to which species the evil emperor belongs. He appears to be some sort of cyborg or fully artificial lifeform, though this has never been confirmed (or denied). On more than one occasion Zurg did mention being Buzz Lightyar's father (which would make him human), but these statements were later denied by Zurg himself, who explained that he was simply attempting to temporarily astonish Buzz.

Retrieved from "https://aliens.fandom.com/wiki/Emperor_Zurg?oldid=181178"
Community content is available under CC-BY-SA unless otherwise noted.