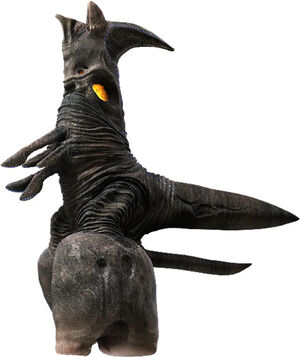 Emperor Sea Striders are the best known and the largest organisms living on Darwin IV. They spend their lives within the confines of the Amoebic Sea, as it is the only source of energy on the planet to support such massive creatures. The species goes through an amazing metamorphosis at some point in its life: when they are born, they are known as nymphs and somewhat resemble more compacted versions of the adults, but differ in that they are capable of powered flight, however, this ability is lost as they mature and develop a bipedal gait, and begin feeding off of the amoebic sea. Their name comes from their ability to walk across the surface of the organic sea's yielding surface, which, despite their large stature, is accomplished quite easily through the utilization of a framework which places their center of mass around their mouths/feet and lower leg portions, with the lightest part being the top of the body. This allows them to maintain a mass light enough to not rupture the membrane of the amoebic sea, and yet retain enough mass to not topple over in the storms that are commonplace in the regions to which they are indigenous.

An enigmatic function of their physiology is their highly unusual feeding system. They possess two mouths, with each being located on their feet, effectively allowing them to eat anything they step on. With these, they shave off great chunks of the sea-matrix for consumption. Identifying traits of the species are the mouthless crested head, flanked on each side by huge orange-glowing bioluminescent cavities, smaller blue-glowing bioluminescent lights accenting their crest and multiple tentacles on their front (likely for communication), and two "tails" - one which is an actual tail and the smaller is a phallus.

The orange cavities in the sides of their head also attract the young Strider nymphs, which orbit around the adult Striders, likely for protection. Interestingly Strider nymphs are in fact prey to the Amoebic Sea itself, which extend in tentacle-like columns to catch them in mid-air.

The original book gives the sea strider a height of 620 feet. In the film, this is reduced to 80 feet.

The sea strider is described in both the book and the film as the largest animal on either Earth or Darwin IV. This presumably means that both versions of the animal have a mass greater than 190 metric tons, the greatest mass recorded for the blue whale.

Retrieved from "https://aliens.fandom.com/wiki/Emperor_Sea_Strider?oldid=169745"
Community content is available under CC-BY-SA unless otherwise noted.