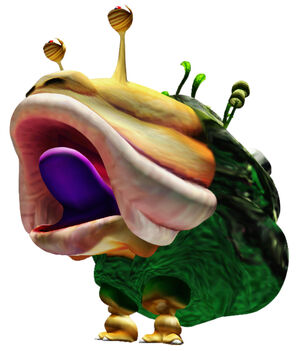 yellow (green due to the moss)

Pikmin Universe
The Emperor Bulblax, otherwise known as the Emperor Grub-Dog' is the largest terrestrial predatory Grub-Dog ever discovered, and second-largest Grub-Dog in the entire family group, only smaller to the Empress Bulblax. It was first discovered by Captain Olimar as a very dangerous creature, with more learned from it through more expeditions to the planet.

The Emperor Bulblax is a very large and bulky creature, dwarfing many other Grub-Dogs in sheer bulk alone. Its large body is mostly made up of its huge mouth, with prominent flews along the upper jaw. Its whole body is supported by two surprisingly small, yet muscular legs with wide-spreading toes to better spread its own weight on the ground. Signature to all Grub-Dogs, the Emperor Bulblax has a set of long stalked eyes.

Although it is a very intimidating animal, it actually doesn't possess any form of teeth of mandibles like most other Grub-Dogs. However, it does make up for this lack of teeth thanks to its very long and large tongue, which is measured over 5 inches long. This makes this beast a similar hunter to the Whiptongue Bulborb, yet its larger jaws make food resources a lot more varied.

Emperor Bulblax also have a lot of plant matter growing on their backs, mainly moss and small plant life growing out of its rocky backside. This is used as a sort of camouflage method during hunting.

During many of the expeditions and explorations done on PNF-404, there was a discovery of a colony of Emperor Bulblax underground. These Bulblax seemingly have different behaviors to that of other Bulblax upon further investigation: they are measured at 130 millimeters, which makes them smaller than standard Emperor Bulblax; they don't have as much plant life on their backs; and they had been found in smaller groups.

There has been a bit of debate over the years in regards to this supposed "subspecies" of Emperor Bulblax, with many starting to conclude that this subspecies is actually a juvenile of the pre-existing Emperor Bulblax. This is mainly backed up on the fact that these "cave" versions (aside from their group behavior) don't behave any differently from normal Emperor Bulblax.

The Emperor Bulblax are ambush predators. They will bury themselves into the ground, leaving only their moss-covered backs and stalk eyes exposed at the surface. It can stay for hours, or even days in this state for suitable prey to come by close enough. Upon this, it will burst out of the ground and lunge at the prey, using its large tongue to lap its catch and swallowing it whole.

Retrieved from "https://aliens.fandom.com/wiki/Emperor_Bulblax?oldid=169502"
Community content is available under CC-BY-SA unless otherwise noted.