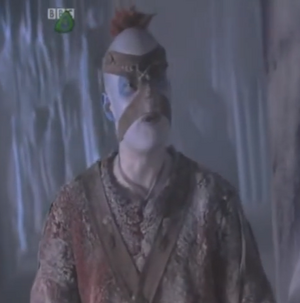 The Eltaans are a humanoid race from the realm of Elta-Siktar in the Outer Dimension.

They are blue skinned humanoids with topknots on their skulls. Like most inhabitants of Elta Siktar, their endothermic temperatures are reversed, hot being cold and cold being warm. They are super fast beings and have cryokinetic abilities.

When word reached Elta-Siktar that Gorm launched his rebellion, the Eltaans sent reinforcements to Galidor. However the Eltaan tribes never made it off Elta-Siktar as they were ambushed by an unknown enemy.

The have a long standing feud with the Siktari who they view as barbarians.

Retrieved from "https://aliens.fandom.com/wiki/Eltaan?oldid=182198"
Community content is available under CC-BY-SA unless otherwise noted.