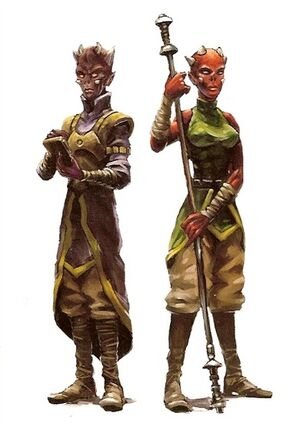 The Elomin are a race of tall, thin humanoids native to the planet Elom.

They're distinguished by their pointed ears and the four horns that crown their heads. Their eyes are widely spaced, and their upturned noses give them a somewhat demonic appearance. A group of small nose tusks surrounds their nostrils, and these tusks vibrate whenever an Elomin takes deep or rapid breaths. The heart of an Elomin has six distinct chambers, and an individual Elomin has four separate stomachs. Because of these traits, many xenobiologists have come to believe that the Elomin are distant cousins of the Zabrak, although no records exist to support this theory. Some members of Elomin society also have long hair sprouting from just behind their ears, and most individuals have pronounced neck wattles. Popular rumor claims that the Elomin people are descended from a group of Zabrak colonists who arrived on Elom ages before the Clone Wars, but this has never been proven.

As a people, the Elomin strive to find order in all things, and work to create order where it doesn't exist. For many generations, the Elomin were unaware that there was another sapient race inhabiting their homeworld of Elom. This changed when several Elomin miners were rescued from a mining accident by a group of Elom. Elomin society was thrown into confusion, as the Eloms represented something that did not fit into their view of an ordered universe. The Elomin refused to acknowledge their brethren as part of their world, even after the Old Republic granted them full status as a member race.

The Elomin had little advanced technology when they were admitted to the Old Republic, but readily accepted the new technologies they were given access to. When Emperor Palpatine rose to power, the Elomin were enslaved and forced to mine lommite for the Imperial war machine. Many of the younger Eloms were outraged at the suffering that was inflicted upon the Elomin, and joined the Alliance to fight for their freedom. In the wake of the Battle of Endor, the Elomin rewarded their valiant efforts by finally recognizing the Eloms as part of their community.

Retrieved from "https://aliens.fandom.com/wiki/Elomin?oldid=158340"
Community content is available under CC-BY-SA unless otherwise noted.