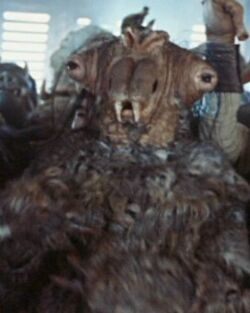 The Elom are a short, heavy race of shaggy humanoids native to the underground caverns of the planet of the same name. Their fur is oily and thick, and their skin is tough enough to withstand the sharp rocks and stones of their habitat. Their fingers and toes end in hooked claws that are used to grasp and dig. Their eyes are set on stubby stalks on either side of their heads, and their mouths are punctuated by two short tusks. They are peaceful herbivores which evolved on the surface of Elom, but moved underground to search out roots and tubers when the water levels of their planet dropped.

For most of their history, the Elom were unaware that another sapient race inhabited their homeworld. That changed when a mining accident trapped several Elomin in an underground cave. A group of Eloms discovered them and helped them return to safety, which brought the two races together, at least in the eyes of the Old Republic. The Eloms were recognized as sapient, and were granted the rights to the territories they already controlled. However, the Eloms chose to remain outside of the galactic community, while the Elomin embraced the galaxy. Some younger Eloms were outspoken about receiving the benefits realized by the Elomin, and this dissention was only heightened when the Empire took control of Elom. Many of these younger members of Elom society joined the Alliance, in an effort to fight for their freedom and that of the Elomin, who suffered more during the Imperial occupation of their homeworld.

Despite these infrequent moments of cooperation, the two races remained geographically and socially separated, especially since the Elomin refused to acknowledge the Eloms in their "ordered" view of thew universe. Many Eloms simply retreated deeper into their caves after the Battle of Endor, even after the Elomin accepted them as peers, in recognition of the efforts of those Eloms who fought for the Alliance during the Galactic Civil War. Tanus Spijek was part of the rebel alliance. Vigrrev was a member of Jabba's empire.

Retrieved from "https://aliens.fandom.com/wiki/Elom?oldid=184374"
Community content is available under CC-BY-SA unless otherwise noted.