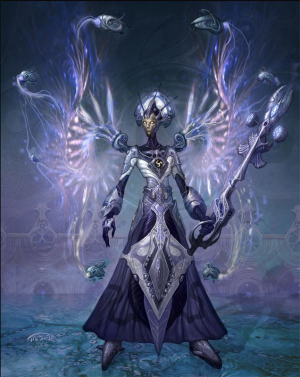 The Eloh - also known as the "Benefactors" - are a mysterious, highly advanced alien race.

The Eloh were a race of teachers that sought to bring enlightenment in the universe by spreading the knowledge of Logos. Unfortunately, one of the species that learned the power of Logos from the Eloh, the xenophobic and aggressive Thrax, used their knowledge to wage war against their patrons and to take over from their masters as the most powerful race in the galaxy. The Eloh manage to defeat the Thrax, but only at great losses.

This incident led to a great dispute among the Eloh. One faction believed that the Thrax were an unfortunate exception, and that the Eloh should continue to share the Logos technology with the "good" alien races across the galaxy. The other faction, which later became known as the "Neph", believed that it was too risky to share the Logos knowledge with "lesser" races, and that the Eloh should use their powers to reign the galaxy in a much more stringent, dominant manner, to make sure that no other race ever stands up against the Eloh again.

Eventually the dispute split the Eloh people deeply and sparked a civil war. The Nephs used the weapons and technology of the aggressive Thrax, defeated the Eloh and took over as the leading force on the Eloh home planet. Many of the good Eloh were killed, and those who survived fled through wormholes to hide on remote worlds of the galaxy. The Nephs, now without any Eloh opposition, used the Thrax as their military force, created an army and started a crusade to defeat and subdue any intelligent civilization in the universe. As they conquered planet after planet and added the enslaved species to their forces their huge army grew stronger and became known as the "Bane" of the galaxy.

The Eloh knowledge of the Logos science made them extremely powerful and allowed them to travel across the galaxy. Fortunately, the Eloh are of friendly and peaceful disposition and used their superior powers not to attack and subdue other alien races across the galaxy, but to foster and support them. To do so, they shared their knowledge of Logos with those species advanced enough to understand it.

On some planets that the Eloh came across while travelling the galaxy, like Earth or Foreas, the cultures were still in their infancy. The inhabitants were found to be too primitive by the Eloh to grasp the full power of Logos. The Eloh left these worlds behind to return later, but not without any "seeds" that would allow these races to learn about the power of Logos. These seeds come in the form of statues, scripture, and most importantly, Logos shrines. At such shrines, a receptive may study and learn about the Eloh and the science of Logos.

The Eloh writing is pictographic logogram language in which a single grapheme symbol represents a whole word, similar to Chinese writing or ancient Egypt hieroglyphs.

Eloh writing can be found scattered across the planets that the Eloh have visited while travelling across the galaxy, usually near other Eloh artifacts.

Retrieved from "https://aliens.fandom.com/wiki/Eloh?oldid=173814"
Community content is available under CC-BY-SA unless otherwise noted.