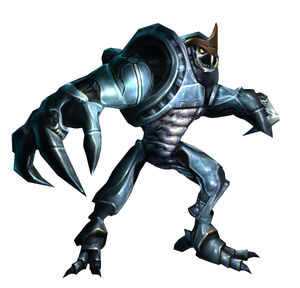 The Phazon-mutated Elite Pirate is the product of the Space Pirate Project Helix, a research project to create powerful new Pirate soldiers by using the dangerous mutagen known as Phazon.

Elites are nearly twice the size of a normal pirate, covered in armor and armed to the teeth with deadly weapons, including Plasma Artillery Cannons, wrist bayonets, energy siphons and shockwave generators. The cannons fire powerful explosive blasts, but it can be targeted and destroyed by using the Thermal Visor. The energy siphons attract and absorb beam shots, but it does not affect missiles. The shockwave generator allows the Pirate to unleash a devastating energy wave with a ground pound.

Elite Pirates are far stronger than their lesser brethren. However, due to being infused with Phazon, they are dependant on it for life, like how the Outcasts are dependent on Cardamine. A special nutrient-rich Phazon solution was created to feed the Elites, and the supersoldiers were kept in large cryostasis tanks that bathed them in Phazon radiation.

There were several other kinds of Phazon-infused Space Pirates, including the heavily-mutated Phazon Elite, the colossal Omega Pirate and later the Berserker Knights and Berserker Lords.

Retrieved from "https://aliens.fandom.com/wiki/Elite_Pirate_(Metroid_Prime)?oldid=166368"
Community content is available under CC-BY-SA unless otherwise noted.