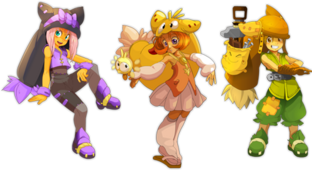 Ankama
Eliatropes are a race that are not native to the World of Twelve and do not worship the same gods as humans, but have a human appearance. Their most recognizable characteristic is the large hat worn by every individual, presumably to hide the one non-human feature that is visible on their heads. All of the hats have two "ear-like" extensions of varying sizes and shapes, that have been shown to move based on an Eliatrope's emotions, which has led most people to expect horns or an additional pair of ears.

The first Eliatropes were born after the goddess Eliatrope's second dance with the Great Dragon. The first six each had a Dragon twin, and each pair hatched from a common Dofus. These first six Eliatropes and six Dragons, the firstborn, formed a Council that ruled over the Eliatrope civilization, whose other members incarnated naturally. All members of the Council are practically immortal as they can be reborn from their Dofus once both twins have died and their Wakfu has replenished. They are, however, reborn as babies with no memories of their past incarnations, except for Qilby who can recall all of his previous existences.

There is no precise timeline given for the early ages of the Eliatropes, but the first date that shows up in the lore is 10,000 years before Xelor's Clock, when Yugo was king and the Mechasms arrived on the Eliatropes' home planet. They coexisted peacefully for centuries, but then Qilby stole the heart of Orgonax, the youngest Mechasm, unbeknownst to his own people. The Mechasms demanded the heart, but no one knew what had really transpired and a war quickly broke out, forcing Yugo to hide his people's children in another dimension, Emrub. Unable to stand against the Mechasms, the remaining Eliatropes fled the planet aboard Qilby's newly constructed spaceship, Zinit, and searched for a new planet to call home.

Their search led them to what is now known as the World of Twelve, but long before the gods had found it and created human life on it. The Eliatropes founded the colony Vili, then brought their children back into this dimension, but peace was only temporary. Orgonax, an important member of the Mechasms, located them and once again led an assault against their civilization, leading to the events of the Xbox Live Arcade game Islands of Wakfu. Once again, Yugo sent the Eliatrope children to the timeless dimension, before confronting and being defeated by the Mechasms' leader. As a result, the game's protagonist Nora and her Dragon twin Efrim are tasked with repelling the attack at all costs.

After Nora and Efrim defeat Orgonax, the planet becomes uninhabitable and Eliatrope history goes silent for millenia as most members of the Council have been killed and are recovering inside their Dofus, while the children are still safe but locked in Emrub under the watch of the Dragon Baltazar. The games Wakfu: Les Gardiens 1 & 2 let the players see first-hand the kind of life these children live and how Baltazar has convinced everyone that there is nothing outside Emrub... until N discovers the truth by escaping through a time-space rift opened by Nox's time travel at the end of Wakfu season 1. In the second game, the children are actively trying to leave the dimension as well, but since it was cancelled mid-season, it is not known whether they sucessfully reached the World of Twelve.

Outside of Emrub and N's incursion in the Age of the Dofus, it wasn't until Yugo was reborn in 969 that Eliatropes were seen in the World of Twelve, and by the end of the animated series' two seasons, he and Chibi remain the only two Eliatropes on the planet, still looking for a way to find a new home for their people and offer them a new beginning.

Eliatropes can manipulate Wakfu in many ways, the most notable of which is their use of portals. In addition to going

from point A to point B, they can chain portals to travel at high speed, open multiple portals at once to confound an enemy in combat, send one portal through another to create a destructive energy beam, etc. Yugo and Qilby have also shown their ability to manifest energy weapons out of Wakfu, create extremely large portals and travel through dimensions.

It is worth noting that while Eliatrope Dragons have been seen using Stasis (such as Adamaï in the animated series and Efrim in Islands of Wakfu), that ability is not known to extend to Eliatropes. 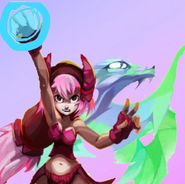 Nora and Efrim, the primordials dragon and eliatrope's siblings.

Yugo and the rest of eliatrope childrens, creating many portals.
Add a photo to this gallery
Retrieved from "https://aliens.fandom.com/wiki/Eliatrope?oldid=162994"
Community content is available under CC-BY-SA unless otherwise noted.