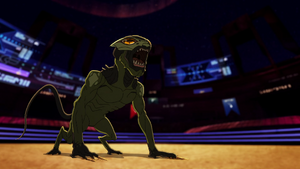 Marvel (via Guardians of the Galaxy)

The Elemental Beast is an alien species turn into the form of any element.

The Elemental Beast primary form appears to be lizard like with lime green skin. It has yellow eyes.

The elemental beast used to be numerous across the galaxy until Gamora wiped most of its species until there was only one left.

The elemental beast is able absorb and turn into any element it touches. It can also change elements at will

Retrieved from "https://aliens.fandom.com/wiki/Elemental_Beast?oldid=153995"
Community content is available under CC-BY-SA unless otherwise noted.