""If the plain signs of surviving elder horrors in what I disclose be not enough to keep others from meddling with the inner antarctic - or at least from prying too deeply beneath the surface of that ultimate waste of forbidden secrets and inhuman, aeon-cursed desolation - the responsibility for unnamable and perhaps immeasurable evils will not be mine.""
―Prof. William Dyer 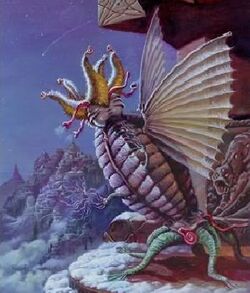 Old One
Elder One
Qhrell

City of the Elder Things

At the Mountains of Madness

"The toughness of the things was almost incredible. Even the terrific pressure of the deepest sea bottoms appeared powerless to harm them. Very few seemed to die at all except for violence, and their burial places were very limited."
―Prof. William Dyer

Elder Things are sapient, radially symmetrical, and nearly invincible. They are incredibly strange creatures, sharing characteristics of animals and vegetables alike. They are able to enter a peculiar state of preservation that allows them to survive extreme temperature fluctuations, vacuum, and without any need to eat or breathe. These beings have five of everything; eyes, mouths, wings, etc.

Their metabolism is based on carbon dioxide instead of oxygen; their blood is dark green in color. The nervous system of the Elder Things is quite complex, with five-lobed brains and many ganglial centers. The prismatic cilia on top of the creatures' head suggest that they have senses other than sight, smell, touch, hearing, and taste. Elder Things reproduce through spores. They can derive nourishment from inorganic substances, but prefer to feed on organic life.

Arriving on Earth over a billion years ago, the Elder Thing civilization prospered for millions of years. In ancient times their civilization was spread all over the Earth, but now is limited to the deepest parts of the ocean. These beings are actually responsible for the development of all life on Earth, which they bred primarily for food.

The culture of the Elder Things was highly developed. Their art is best manifested in their bas-reliefs, which depicted their history and lives in stunning detail. Their architecture often imitated their five-pointed anatomy, and this same pattern can be found in their writing and currency. They appear to be atheistic as a species, although they revere the DNA helix as the source of all life.

During their "Golden Age" on Earth, they fought wars with many species, including Mi-Go, the Spawn of Cthulhu, and the Great Race of Yith. They also experienced a violent rebellion of their shoggoth servants, which they brutally put down. Though they often triumphed, these conflicts often had heavy casualties; eventually, they abandoned most of their cities, although their art remained. 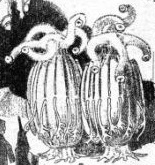 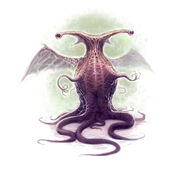 A gritty and realistic depiction of the Elder Things.

Ruins of the Elder Things along with their mural and artwork. 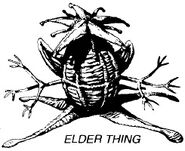 The Elder Things have colonized countless worlds throughout the universe. They prefer worlds that lack sentient life as one of their interests is creating life. Whenever they find such a world, they will war against other spacefaring and extradimensional races for the rights to the world (e.g. Mi-go, Xothians, or Flying Polyps). Apart from creating life, they also have a passion for creating art and architecture. Though having the ability of space flight without starships, it takes them months to cross a solar system or 1000s of years to reach another star system, so they go into hibernation during the trip. If they stay too long on a world, as in eons, they lose the ability to survive in the vacuum of space. On numerous worlds they have created the Shoggoth, and on many of those worlds their creations rebel and end up destroying the Elder Thing colony. Biologically they are 6ft tall with a 7ft wingspan and have psionic abilities.

The Cruel Empire of Tsan Chan[]

The Elder Things are a galactic power who possess great space armadas and oppose the Great Old Ones. Currently aiding the human-controlled empire of Tsan Chan (formerly China) in their war with the Xothians and their human Dreamer slaves / followers, the Tcho-Tcho barbarians, and the Mi-go by supplying them with technology and weapons. In exchange the humans and their Serpent People allies are helping the Elder Things regain their lost city in Antarctica by fighting the Shoggoth. The Elder Things themselves are not directly involved in the wars on Earth in 5000 AD, only monitoring to make sure that Cthulhu and the Xothians don't turn their attention toward the Elder Things.

The Elder Ones were previously the dominant force in the galaxy whom colonized hundreds of worlds. By the 21st century, they are a pale shadow of what they were before with only a few worlds left in their possession. Have nanotechnology that is capable of using hyperspatial energies to create a field around their body that lets them fly through hyperspace.

The Qhrell are fighting a war in pre-historic Earth (hundreds of millions of years ago) against an extra-dimensional invasion by the Xothians. The Qrell possess directed energy weapons and are masters of genetic engineering. They stand 7 ft all and can survive the pressures of the deep ocean, the vacuum of outer space, and freezing temperatures.

The Primordial Ones are a genocidal species that hates all other sentient life and will destroy such life if the opportunity presents itself. They have both psionic abilities and the ability to use magic.