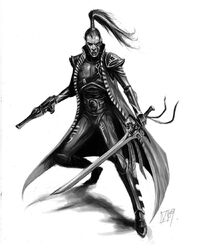 The Eldar are a race of lithe, elf-like humanoids found in the Warhammer 40,000 universe. The Eldar are a tall, graceful, humanoid species with pointed ears with an uncanny outward resemblance to humanity.

The Eldar were created by a group known as the Old Ones to serve as soldiers in a time of crisis. After the crisis had passed, the Eldar had survived their creators and, being the most intelligent, stable, and populous of the surviving species, became the dominant galactic power until ca. 30,000 A.D.

Approximately 60 million years ago occurred a crisis known as the War in Heaven, a war between the two extant major galactic powers. The War in Heaven was instigated when the Necrontyr Empire and their C'tan overlords declared war on the Necrontyr's rivals, a species or coalition known only as the Old Ones.

The Necrontyr had the advantage in raw military might (particularly with the C'tan) and conventional technology, especially after their recent conversion to the robotic Necrons. The Old Ones had their advantage in psychic power, technology, and techniques, which included methods of creating life. While the Old Ones created and seeded life throughout the galaxy before the War in Heaven, it was the first time that they would be forced to create purpose-built soldiers to survive.

Leading up to the moment the Necrons could claim a final victory, the Necron supreme leader Szarekh, the Silent King, ordered every troop and weapon to turn on the nearly expended C'tan. With the unified might of the Necrontyr forces turned upon them, the C'tan were beaten by their own forces. Though most of the C'tan were too powerful to be destroyed outright, many were shattered into "shards", lesser beings which the Necrons could capture and imprison.

The War in Heaven had been a political war orchestrated by the Silent King to unify the divisive Necrontyr dynasties for the sole purpose of destroying the C'tan. This was done for revenge for tricking the Necrontyr into becoming the soulless Necrons, and so that the Necrons would be their slaves no longer. With the objective of the War in Heaven achieved, and his rivals decimated, the Silent King ordered the dynasties to sleep for the next 60 million years to allow the devastated galaxy to heal, and for his subjects to research means of transferring their conscious back into bodies of flesh once they awoke. After dispatching his last order, the Silent King left the galaxy in self-imposed exile.

The Eldar found themselves with an opportunity that was practically unique within galactic history. Their enemies disappeared from the galactic stage presumably never to return, their creators were diminished beyond recovery, and all of their former allies now turning to rivals that simply couldn't hope to oppose them. The Eldar would found a new galactic power that could consolidate practically entirely unopposed.

Up until 30,000 A.D. the Eldar would rule the galaxy as the only great power. With their technology inherited from the Old Ones and improved upon, the Eldar boasted total mastery of galactic phenomena, quenching and igniting stars as they saw fit, or terraforming dead planets into a virtual paradise in just the thousands of years.

Labor and military were largely automated. Enemies like the Orks or aggressive minor species would either be exterminated or forced to the fringes of their empire. Friendly minor species, such as humanity, would be allowed to expand into minor powers, though with rarely more than a few dozen systems. Commorragh at this time was the heart of Eldar trade networks and became a place of great prosperity.

It was by all accounts, a lengthy golden age.

The Fall of the EldarEdit

With such a long period free of major problems and opposition, and nothing to do but to enjoy the continuing fruits of their labor, the Eldar started to indulge in hubris and indolence. Their relations with outside species would sour as individual Eldar began to look down on their younger peers.

The majority of Eldar would begin to practice sadism and hedonism out of simple boredom to inject excitement into their idyllic existence, starting as strange and distasteful private practices at first, but would eventually grow into shocking and grotesque public displays over the years. Worship in their deities declined as they started to aggrandize themselves and particularly revered members of their libertine society. Most Eldar started to ignore the practical problems that were starting to show and mount, many as consequences of their indolence.

Many Eldar saw the rot taking hold in their society and saw it as a moral and practical quandary. When they were ignored, these Eldar would leave their empire's heavily populated core worlds. Many would found colonies on distant worlds to give up their technology and live pastoral lives in the undeveloped parts of the galaxy. Others would find permanent residence on the Craftworlds, gigantic trade ships made to serve as population and power centers in space, and would leave for the depths of space.

In the Eldar core worlds, they would turn to enslaving one another and other species, and their sadistic tendencies was devolving into unmitigated torture. The dark hedonism that took hold in most Eldar was coming to a bloody crescendo.

As the Eldar were finding new atrocities to commit in realspace, their actions and emotions were coalescing into a new, nascent entity in the Warp. The Eldar Gods were weakening with neglect, and most of the Eldar's energy and emotions were feeding this new entity, shaping it with their newfound dark emotions and tendencies. This new entity would coalesce for some time before its birth would shake and destroy the core of the Eldar empire.

This nascent deity would become Slaanesh, the Chaos god of hedonism and excess. The cataclysmic moment of its birth would be known as "the Fall of the Eldar," a moment which would reshape the galaxy in a way not seen since the War in Heaven.

Retrieved from "https://aliens.fandom.com/wiki/Eldar?oldid=181132"
Community content is available under CC-BY-SA unless otherwise noted.