Ben 10
The Ekoplektoids are a tortoise-like species from the planet Ekoplekton[1] who are capable of kinetic self-duplication.

Ekoplektoids can duplicate themselves into using kinetic energy whenever enough pressure is applied to their backs. Much like the Splixsons, the clones can act independently from one another.

Ekoplektoids possess enhanced strength, though their clones can become stronger by a proportionate amount each time they duplicate.

Ekoplektoids possess enhanced durability thanks to their bodies being made up of a metal quite tougher than crystal. Their clones can become more durable each time they duplicate, as a quartet of clones are durable enough to harm a member of Bashmouth's Species.

An Ekoplektoid's clones also become heavier in weight and denser in mass, allowing them to withstand strong winds such as those generated by a Weatherhead.

Ekoplektoids are heat resistant, as they can survive on environments such as Pyros. They are also immune to lava and can be used as surfboards by other beings to ride along it.

If Ekoplektoids create enough duplicates, the total number of clones can become as dense as a black hole.[1]

Omni-Kix Ekoplektoids can duplicate themselves through explosions in addition to using kinetic energy. Also, their natural durability is increased to exponential levels thanks to their Omni-Kix armor, making their smallest clones indestructible.

Each time an Ekoplektoid duplicates, the clones become smaller in size. Similar to a Galvan's naturally small size, a set of eight clones are at a disadvantage due to being small-sized, and do not stand a chance against an army of larger entities.

Similar to an Oryctini's weight, the combined weight and density of any set of Ekoplektoid clones can have a negative effect on an environment other than their home planet.

Ekoplektoids can be lifted and thrown by a species with as much strength as a Florauna.

Ekoplektoids can often have trouble reaching their backs in their base form, requiring help from external sources to activate their kinetic duplication powers.

The Ekoplektoids' self-duplication ability has led to overpopulation on their home planet. To rectify this, they partake on a space expedition for "more space". In other words, they are trying to find places to expand the population of their race without overcrowding Ekoplekton.

With each set of clones an Ekoplektoid produces upon duplication, their voices become higher pitched.

During one of their searches for extra space, the Ekoplektoids arrived at Pyros and befriended the Pyronites. On another trip, they arrived at Lepidopterra and were mistaken for invaders by the Lepidopterrans, but were allowed to stay after explaining their mission. 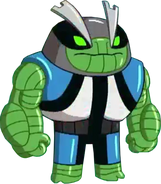 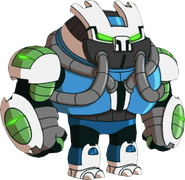