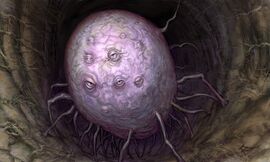 The Pale Beast
God of the Labyrinth

Eihort, also known as the God of the Labyrinth, is a Great Old One.

Eihort resembles a giant, oval-shaped, gelatinous creature with various eyes and bony legs. Whenever, Eihort encounters a Human, Eihort offers them a bargain to have the Human be impregnated with one of Eihort's various unborn young. If the Human rejects the bargain, Eihort will kill and consume him/her and wander until it encounters another Human; if the Human accepts the bargain, Eihort will impregnate the Human with its young. When the young is born, it will kill the host.

Eihort resides in a vast network of tunnels underneath Severn Valley in England. In the Revelations of Gla'aki, It is said that Eihort's brood would become the dominant species on Earth after the downfall of humanity.

Retrieved from "https://aliens.fandom.com/wiki/Eihort?oldid=185596"
Community content is available under CC-BY-SA unless otherwise noted.