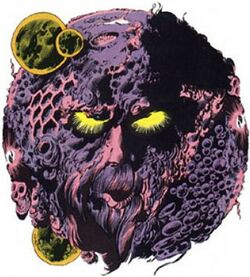 Marvel
Ego the Living Planet is a unique space-faring life-form from Marvel comics, most often seen as a villain he is a dangerous and powerful alien who often wars with both humanoid races and other cosmic entities, he has also shown the ability to reproduce : forming such oddities as Id the Selfish Moon and Alter-Ego.

Ego is in complete control of his body, which is completely alien in design - despite being a "living planet" Ego is constantly described as a vast biological life-form and has displayed an array of devastating abilities far beyond the measure of most humanoid life - he can form faces or other structures from his mass, he can devour entire colonies who try to land on his surface and is shown to have a gigantic brain with untold telepathic power comparable to entities such as Galactus.

As a "living planet" Ego is effectively immortal, having lived for centuries and being able to regenerate on a molecular level - with such age comes incredible knowledge and cunning, sufficient that he joined the Elders of the Universe during their attempts to usurp Galactus and effectively become gods in a new universe.

Ego is also capable of reproducing, when parts of his structure are broken off they may develop unique intelligence - such as happened in the creation of Alter-Ego.

Finally, Ego is able to move freely in space but this is not a natural trait and rather the result of a powerful engine that has grown within his structure - allowing the planet-sized being to travel the stars.

Retrieved from "https://aliens.fandom.com/wiki/Ego_the_Living_Planet?oldid=188358"
Community content is available under CC-BY-SA unless otherwise noted.