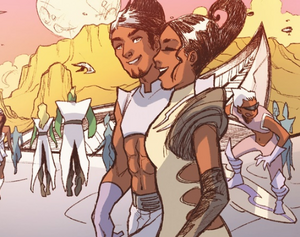 The Ede were an ancient race that were one of the early races of the first galaxies.

The Ede were a humanoid species, granted with great power. They were able to manipulate reality, and conjure strange abilities. However their one restriction was that they could not use their gift to their benefit.

On Ede Prime, the Ede lived in prosperity as no society had before. Their peaceful and healthy society did not go unnoticed. One day a stranger from beyond appeared in the city. She declared that the Ede were a perfect example of what was possible for mortals. She wanted to give them the power to 'help' others, but was worried that power would corrupt them. So she gave the Ede phenomenal power, with one restriction-they could not use this power for their own benefit or protection.

The Ede were dispatched to a dozen star systems, where they were to use their powers to aid other races in attaining peace and prosperity they had.

They pressed the people they 'helped' to meet, to talk through their differences, to choose peace. But the Ede overestimated the creatures that inhabited the galaxy. When those the Ede helped discovered that their enemies had Ede as well, they sought to regain their advantage, by killing the Ede.

The Ede soon were driven to extinction their homeworld was bombed and the survivors hunted down.

One Ede managed to survive however, Xirena Awhina one of the members of the Elders of the Universe. Xirena's parents had chosen to reach out to an exceptionally bloodthirsty species. They were murdered for attempting to stop state-sponsered death matches. Their daughter who hid, came to the realization that the strong made the rules. Now the last of her species, dedicated her life to survive becoming the Promoter.

The Ede were a peaceful society and using their powers committed themselves in bringing prosperity to all. The Ede were regarded as heroes-even gods by other races.

Retrieved from "https://aliens.fandom.com/wiki/Ede?oldid=168755"
Community content is available under CC-BY-SA unless otherwise noted.