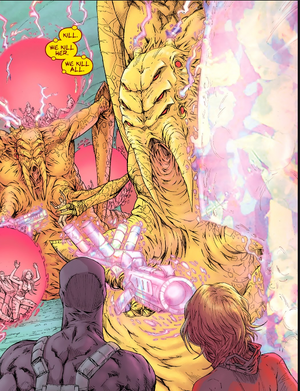 Extermination
The Edda are a race of eldritch beings from another dimension that can only be accessed through dreams.

The Edda are massive yellow gastropod creatures, with four appendages. They are transcendent beings that project themselves astrally into Earth's reality.

They dwell in the gaps between parallel worlds. Their natural environment contains a transformative energy that is possibly sentient, a conceptual psychic resonance. The realm can only be focused through a neural matrix, a living mind. However usually such doorways are brief as no ordinary mind could withstand without it being vaporized after a few microseconds.

The Edda came to Earth under mysterious circumstances. Immediately before their arrival the Earth experienced several cataclysmic events: Tsunamis, earthquakes, etc. Earth weakened by the planetary events, the humans were unprepared for a military assault when the aliens appeared. They devastated the remaining nations and even the superheroes of the Salvation Federation were defeated due to the loss of Absolute, its greatest hero.

The Edda began to harvest the surviving humans, farming them like cattle for their negative emotions. Those that were drained of emotions were turned into Huskers. The remaining heroes and villains formed an alliance to free Absolute who had been imprisoned at the Abattoir.

Nox, a crimefighter explained to the heroes and villains that prior to the invasion, he and Absolute held a grudge against one another. The source of their conflict was over the affections of Mynxx, a villian/catburglar. The two fought over her, engaged in a childish grudge match from behind the scenes while they maintained their mantles as upstanding heroes. They used numerous gadgets and techniques to out do one another, until finally Absolute created a device that would open him to limitless power.

When he confronted Nox, he activated the device, it unleashed the Edda unto Earth. The heroes and villains laid siege on the Abattoir, taking heavy losses until only Nox and his archnemesis the Red Reaper were left. Red Reaper deduced that Nox was lying what transpired between him ans Absolute. The truth was that Nox created the device as a side project during his hero career. It was his intent to use it to make himself a metahuman or Powered, however it require a living mind to use, a normal human however would never survive.

Red Reaper disgusted by his former enemy's idiocy goaded him to redeem himself to save humanity. Nox consented, but not after giving him Mordium, the very element that could kill Absolute. After Absolute was freed he single-handedly defeated the remaining Edda forces left behind after the portal closed. Reaper out of respect for Nox's sacrifice and his own ambition, killed Absolute, ending the age of heroes.

Retrieved from "https://aliens.fandom.com/wiki/Edda?oldid=187564"
Community content is available under CC-BY-SA unless otherwise noted.