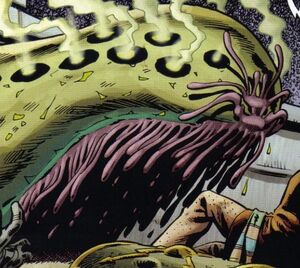 Unknown (capable of at least comprehending an alien language)

Doctor Who
Ectoslimes are a large species of tentacled predators which produce a foul-smelling odor to stun prey before liquefying the victim and drinking its liquefied tissues.

Members of this species appear as gigantic green slugs with a purplish underside with multiple tentacles, dripping digestive fluids.

Curiously, the Ectoslime's one weakness is its sense of humor, as it can understand jokes (told in an alien language that the Doctor can speak) and will cease to attack if it finds them humorous. This suggests that the Ectoslime may be intelligent, although its exact sapience level is not known.

In an alternate timeline in which the Roman Empire never fell and became a multi-species interstellar empire, Ectoslimes are employed as beasts to fight in the gladiatorial arenas, to the entertainment of the population.

Retrieved from "https://aliens.fandom.com/wiki/Ectoslime?oldid=180166"
Community content is available under CC-BY-SA unless otherwise noted.