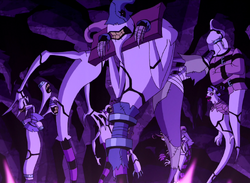 Ben 10
The Ectonurites, alternativly known as Ectonurians,[1] are a race of ghostly aliens from the planet Anur Phaetos in the Anur System.

Ectonurites are ghost-like aliens with a frightening skeletal appearance which is concealed by their second skin layers. Without their secondary skin, they have dark blue skin, sharp teeth and claws, exposed bones in certain places, and sinister-looking skulls.

An Ectonurite's powers are reminiscent of several aspects of traditional ghosts from myths and lore such as flight, levitation, phasing through solid matter, intangibility, invisibility, and body possession. Whenever an Ectonurite possesses another lifeform, they gain access to their hosts' natural powers.

Due to their unconventional definition of being "alive", Ectonurites lack any traces of Mana in their being. In turn, this makes them immune to having their life energy drained by either Ormerowons[5] or entities like Darkstar.

Because they are alive in an unconventional sense, Ectonurites can survive in the vacuum of space. In fact, the darkness of space allows them to use their powers at their fullest potential.

An Ectonurite's individual eye can move to any part of their body, giving them 360° eyesight.

An Ectonurite's secondary skin can protect them from bright lights, and be opened up or retracted to release tentacles as a means of self-defense. They can also project energy beams from their chests, even when at their full potential.

Ectonurites are capable of telekinetic abilities in which their hands are surrounded by a glowing bluish-purple aura.

Eectonurites can either physically or mentally reposition their skulls, with the right-side-up position being more comfortable to them than the upside-down position.

Ectonurites have the remarkable ability to be remade from a molecule of DNA.

Like the other races in the Anur System, Ectonurites are immune to the effects of Corrodium and can see in the dark.[3]

Ectonurites can alter their shape and deform like gas by making themselves into a grey, somewhat transparent smoke-like wispy form. While in his form, they are immune to being absorbed by Gutrot's Species.[3]

Exposure to direct sunlight or something as bright as a Fusion Cuisine generated by Atomix's Species can destroy an Ectonurite unless they have a secondary skin. Similarly, they can be burnt by a Chimera Sui Generis' optic lasers or the light generated by a Prypiatosian-B.

An Ectonurite's intangibility is consciously used, which means they cannot use this ability while caught off-guard. Similarly, opponents who are also intangible will cancel out each other's intangibility.

Though it is said Ectonurites are one of the most frightening races in the Milky Way, they not as frightening as Toepick's Species. In fact, Ectonurites can experience fear at the presence of this species.[3]

Ectonurites can be affected by magic, as there is a spell powerful enough to knock them out with one shot.

Certain substances can neutralize an Ectonurite's intangibility and invisibility, such as a special orange liquid used by Kraab. It is possible that Gutrot's Species can replicate this liquid in a gaseous form.[3]

Besides light/solar-generating species, there are other beings Ectonurites are unable to possess. For example, they cannot possess zombies because they lack minds of their own. They are even unable to possess Dagon.[3]

Being ghost-like in nature, Ectonurites can be harmed by psychokinetic energy.[6] They are also vulnerable to electricity in general, such as that generated by Transylians and Conductoids, unless they become intangible.

Ectonurites are unable to possess technology that is protected by powerful safeguards, such as the Omnitrix.

Ectonurites can be immobilized by ice, such as an Evolved Necrofriggian's ice flames, though they can escape by becoming intangible.

Like other living beings, Ectonurites can be controlled by a Vladat's Corrupturas unless they become intangible beforehand.

Ectonurites can be trapped in an Evolved Arachnichimp's webbing, though they can escape by becoming intangible.

Despite their unconventional sense of life, Ectonurites can still experience death, as they cannot survive on Anur Vladias.[3]

Despite their possession powers, Ectonurites are vulnerable to being possessed by others of their kind.[3]

Ectonurites are vulnerable to being imprisoned in machinery that they cannot phase out of.[3][7]

Ectonuries can use their ghost-like powers to slowly become rulers of every planet in the Anur System.[2] 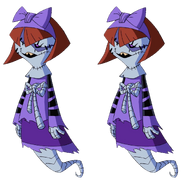 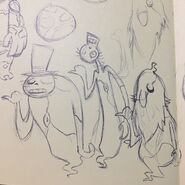