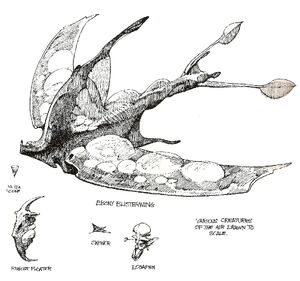 The diet of this majestic being is unknown. It probably feeds on the millions of microscopic organisms that spend their lives floating in the skies of Darwin IV. It is also possible that the Blister-wing is able to perform photosynthesis, absorbing sunlight through its dark skin.