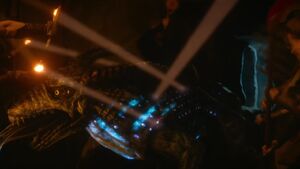 anything that generates light or heat

to consume light and have the ability to burn out stars, drain victims so that they appear as if they were deprived of sunlight for decades

Doctor Who
The Eaters of Light are a race of extradimensional predators that travel from star system to star system in search of light to consume.

The Eaters of Light has a body posture reminiscent of other quadrupedal predators such as the lion or a komodo dragon. Their skin is very reptilian in nature and the skin of certain body parts such as the head appears thin and can make the bones underneath like the skull visible. They also have sunken eyes and a crocodile like skull. The Eaters possess tendril-like tongues with a blue bioluminescent pattern and are used to drain light from anything capable of generating it. They have various bioluminescent parts of their skin such as their under belly. They also have a frill that gives the Eaters a dragon-like appearance.

As stated by their name, the Eaters consume anything that generates light and heat (including stars and various living beings such as humans). In swarms, they can have the power to burn out stars. Their mode of transportation to different world is by going through gateways connecting our universe with theirs. They kill their victims by draining them of heat and light, which ultimately leaves the body to appear as if it had not been exposed to the light of day for decades. The dimension they reside in has a much more slower time span than our own, so much so that a few seconds in their dimension is two days in our universe, a few hours in their universe can last for centuries in ours. They also possess immense strength and regeneration from their consumption of light that a single Eater destroyed the entire Roman Ninth Legion in the second century.

The Eaters of Light become drained of their regeneration and power during night and actively search for light to consume. It is possible to poison the light the Eaters consume by refracting said light through a rose quartz geode.

For eons, the Eaters of Light travelled from star system to star system draining stars and living creatures of light and heat, leaving dead stars across its wake. Later in the 2nd century, a gateway to Earth was created in Aberdeen, Scotland where the Picts believed it to be a gateway to a realm of demon-like monsters, and thus must be guarded by a gatekeeper who would enter the gateway to prevent the demons from entering into our world and wreak havoc for decades. One day while the invasion of the Roman Army was on the rise, the current gatekeeper, Kar, decided to let one Eater through the gateway to destroy the Ninth Legion of the Roman army and become so weak in the fighting that it would be easy to defeat. It does manage to kill the Ninth Legion, but it unfortunately grows stronger after killing the Roman army and then begins killing off the Picts and the sky began to darken. With the help of The Doctor and his current companions Bill Potts and Nardole, the Picts and a few of the last surviving Romans drove the Eater of Light back into the gateway and entered the portal with Kar to fight off the Eaters of Light and protect Earth for centuries with the other dimension's slower time steam.

Retrieved from "https://aliens.fandom.com/wiki/Eater_of_Light?oldid=175208"
Community content is available under CC-BY-SA unless otherwise noted.