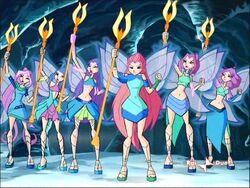 The Earth Fairies (also referred to as terrestrial fairies) are Fairies that are native to Earth. They are the reason for the Winx coming to Earth.

The Earth fairies are Fairies that come from Earth, and have been its guardians since ancient times. The capital where all Earth fairies submit and acknowledge rule is Tir Nan Og, where the High Queen of the Earth Fairies resides.

In ancient times, they lived in harmony with the humans, with Fairy and Human kingdoms coexisting (or possibly the Fairy Realms including Human Kingdoms under their protection or within them), and the Fairies protecting the Nature (and sometimes humans) and spreading its energy throughout the planet. But unlikethey had a more hands off approach than other fairy realms.

Long ago a group of wizards, known as the Wizards of Black Circle, developed a way to resist fairy magic and stole the magic of the Earth Fairies by stealing their wings and sealing them away in their own kingdom.

Centuries later, they were freed from their imprisonment by the Winx and Roxy and began a campaign for revenge against humanity (much to the disapproval of the Winx).

After days of conflict, during which the Major Fairies of Earth Diana and Aurora intervened, the Fairy Queen Morgana decided to give a fair trial to the Wizards but nearly fell in a trap laid by Ogron. After that Nebula overthrew Morgana and after crossing Magix went to the Omega Dimension to seek revenge from the Wizards. The Earth Fairies were almost defeated, but in the end the Winx and Nebula defeated the Wizards, and Nebula repented.

Morgana then made a speech, announcing that their new life had begun and that they owed much to the courage and sacrifice of the Winx girls, and remembered Nabu's sacrifice so that they could live. She then asked the Earth Fairies, for Nabu and for all of themselves, to honor, respect and defend life and to go to the human world, to release their magic and make it a better place. Morgana then abdicated and named Nebula as new Queen of the Earth Fairies and went to live with her daughter Roxy and her husband Klaus in Gardenia.

What happened afterward is unknown, but it is presumed that they are working to fully restore Earth's belief in magic and are doing their best to make the world a better place to live by releasing their magic and the powers of nature throughout it.

Morgana
Add a photo to this gallery
Retrieved from "https://aliens.fandom.com/wiki/Earth_Fairy?oldid=195061"
Community content is available under CC-BY-SA unless otherwise noted.